Carson City » Blog » Uncategorized » The Risk of Flood in Carson City – The Past, Present, & Future

The Risk of Flood in Carson City – The Past, Present, & Future

Published by SEO on October 27, 2021 in category: Uncategorized 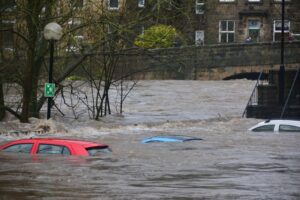 Flooding is a natural disaster that can leave a city in ruins. Carson City in Nevada has been at a high risk of flooding, and it is not a recent issue. Flooding in Carson date back to the 1800s. This article will talk about the past, present, and future situation of floods in this City and some preventative methods to take in case of flooding.

However, hiring professionals to restore your house and make your life easier in emergency cases of flooding and water damage is advisable. Restoration Companies like 911 Restoration have professional staff members who have the expertise to help with water damage. Contact us at (775) 419-0122 now for our services!

The Past of Carson City

While seasonal flooding and related damage is common in Carson City and happens annually, the flooding in 1997 was the most devastating event in the history of Carson City. It occurred on New Year’s Eve in 1997 due to prolonged rain accompanied by early snowmelt. The unexpected snowmelt was provoked by a warm-weather trend known as the “Pineapple Express.”

Heavy precipitation and increased snowmelt levels caused many rivers and creeks throughout Western Nevada divisions to rise to 100-year flood levels, leading to flooding in rural and urban areas. This flood not only affected more than half of the City’s residents but also caused damage to Carson City businesses, residences, and infrastructure. The damage was estimated to be around $5.3 million.

The flood of 1997 was a recent large-scale disaster in Carson City; however, more cases have been as devastating as the 1997 flood.

Records of floods go back to 1851, and it was found that similar nine flooding events occurred up to 1900. These significant floods were caused by both the Carson River and west side tributaries, and during the 20th century, 19 flood events were recorded in this one city alone.

A very recent but significant flooding event over New Year’s Eve in 2005 due to a 25-year, 24-hour rainfall event, and this flood caused severe damage to properties in the city. Over 2 million dollars’ worth of damage occurred to private and public facilities.

One hundred fifty-seven years ago, Carson City was founded in 1851, and since then, 29 major flood events have happened, one about every 5 to 7 years. The two flood events that have been most devastating for the City occurred in 1955 and 1997 and are considered 100-year floods or base floods.

The Present and Future of Carson City

Flooding has caused significant damage to the City. However, to end this 50-year-old flooding issue in Carson City, a solution has been proposed known as the “North Carson Area Drainage Plan” by Carson City Public Works.

The entire Carson City is built on perfectly flat ground, which allows for no drainage. There is no drainage system and gutters throughout the Airport Road area; the water pools together and stagnates. Usually, the only way the street clears is through simple evaporation.

The new plan proposed has identified nine flood-prone areas of North Carson City that need to be addressed immediately. Carmine Street and Sneddon Way are top of the list and need immediate attention. This plan would provide 10-year protection and would cost $9.9 million to realize.

Until this plan comes into action and a proper drainage system is built, here are a few preventive measures you can take in case of sudden flooding. If a storm is forthcoming or flooding has already started, follow these steps to keep your family safe:

Carson City is a high-risk flood area; that is why it is wise to put together an emergency kit that would come in handy in the event of a flood. The emergency kit should include:

Other Steps to Take to Keep Your Property and Family Safe

Carson City is known to have floods annually. 911 Restoration has specialized equipment and years of experience to help in flood emergencies in cases of disaster and water damage to properties. If you’re looking for a Restoration Company in Carson City, our services are available 24/7, and in case of emergencies, we cater to your needs within 45 minutes. Call us now at (775) 419-0122!